The second day we planned to hit the Pirate Ship all day! BBQ for lunch and dinner! Hot dogs for lunch and burgers for dinner! Great family times!

Before heading to the Pirate Ship, I decided to take Matthew to the adult pool where we did some swim lessons, just like at his class. He did well. 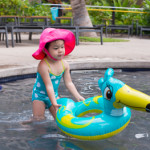 We arrived well in Maui after flying with Hawaiian Air for the first time and for the first time out of San Jose Airport. It was a good flight and there was a lot of leg room much like United’s economy plus section, but without the upgrade costs! The flight was $300 a person, but the first checked bag was $25. No biggie because we were still paying less per person than what it would have costed us to fly United out of SFO. The Super Shuttle ride was a little over $100 for one way. My dad said he would pick us up on the way back.

Because our room wasn’t ready when we arrived, we decided to stop by Costco. Bought $200 bucks worth of food and supplies including a large and a small cooler bag, that has come in very handy. Off to Safeways near Lahaina for other misc food and drinks.

Here are the pics of the initial day! Because our room was still not ready until the check in hour of 4pm, we decided to hit the Pirate Ship Kiddy pool right away. Hayley looked very cute in her swim costume! She was also excited to wear them!

We made our way to San Francisco to go see the Terracotta Warriors they have on display. I was expecting to see a huge number of them, but I think they only had 10 figures/statues. Very cool nonetheless.

The kids were armed with their dSLR cameras. Many people thought it was either very cute or I was crazy!

I was trying to do some panning shots, but they didn’t turn out that well. More learning and more practicing is in order.

I did manage to get some very cute pictures of Hayley and her Hello Kitty sunglasses.

My buddy Viet and his wife, Nancy, had their daughter’s first birthday part at Vasona Park in Los Gatos. It was a nice sunny, but breezy day. The breeze was nice to keep things cool in the warm sun.

It was good to see my buddy and his family.

Some similarities between his daughter and my daughter: They both love the iPhone at an early age and know how to use it!

Today we celebrated Matthew’s 5th Birthday with the theme of Jake and the Neverland Pirates. Family were invited as well as some of his classmates. Based on how sweaty Matthew was as well as some of the other children, I think they had a blast. Matthew even said in the car on the way home, “Mum, you are the best!” The party was hosted by Pump It Up in Belmont.